Much of the U.S. has been warmer in recent years, affecting not only which trees are right for planting, but also threatening the survival of older forests.

Giant sequoias are the world’s largest living species, reaching heights of 300 feet and girths as large as 150 feet. Dorminey wrote, “some sequoias can live in excess of 3,000 years before being naturally toppled by a combination of weather and gravity.”

Giant sequoias have evolved and thrived for multiple millenniums. The species may have survived previous eras of climate change but Dorminey says U.S. government and university researchers claim the long-term existence of these trees might now be endangered as a result of the changing Sierra Nevada mountain snowpack and current changes to the climate.

The complex interaction of rising temperatures and shifts in snowmelt and precipitation is slowly altering and threatening environments where certain tree species have evolved and thrived.

Warmer temperatures also pose the threat of insect infestations which have already killed spruce and pine trees across more than 70,000 square miles of western North America.

Dorminey presented research showing how older forests and trees have proven to be at greater risk to the effects of climate change.

A recent study published in the journal Science found that trees ranging from 100 to 300 years old, located across a wide range of global landscapes, were experiencing rising death rates. This study and other research found that higher temperatures and drier conditions have played an important role in tree mortality and forest drought stress across the continents.

You can see how regional climates have changed over the past few years by visiting the Arbor Day Foundation’s U.S. Hardiness Zone map which was developed based upon data from 5,000 National Climatic Data Center cooperative stations across the continental U.S. 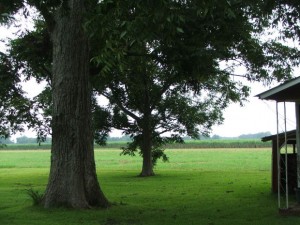 Don’t get me wrong, I love trees. I’ve never actually been caught in the act of hugging any, to be sure. But neither will you ever catch me with a yard without trees. I just couldn’t imagine warming up to a landscape without them. The importance of the vertical element they supply in landscape design is not to be underestimated.

But now that I’ve established my credentials as a lover of trees, let me state what I really set out to say when I sat down to write this blog post today. Large trees, as indispensable as they are, pose an awfully difficult challenge in landscaping — unless that’s all you wish to grow in your yard. END_OF_DOCUMENT_TOKEN_TO_BE_REPLACED

Some plants classified by the experts as “shrubs” are often thought of as “trees” by the general populace. And while the experts employ technical definitions to make the distinction, even they admit that there are exceptions to the rules that they come up with, rendering their definitions less than completely satisfying.

Further clouding the issue is the age-old debate of whether we should classify something according to its intrinsic qualities or how it is used by humans. The uses for a landscape plant such as rose of sharon include mass usage in a hedge to form a privacy screen and individual usage as a specimen plant.