More than 135 million residents in 3,400 communities across America and Puerto Rico call their home a Tree City USA. Tree City USA is a program of the Arbor Day Foundation that provides the framework for communities to manage and improve the care of public trees. 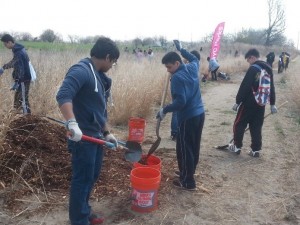 For 19 years the 8.4 million residents of New York, New York have called their home a Tree City USA, earning recognition as early as 1983 and spanning to 2014.

Locals and tourists of New York City can appreciate the beauty of the five million trees found throughout city by relishing a scenic bike ride or strolling along any number of parks.

Despite being an influential center of art, culture and finance, New York City is comprised of more than 11,000 acres of parkland—equating to 40% of the city—demonstrating that it places importance on community forestry as much as its other attractions.

But it doesn’t stop there. New York City continues to grow its community forest through initiatives such as MillionTreesNYC—a campaign launched in 2007 aimed at planting one million trees by 2017. Approximately 70% of the trees—700,000 trees—are to be planted in parks and other public spaces. Residents can even participate in the program by adopting trees and tracking the care of their trees online. Nearly 12,000 trees have been adopted in the MillionTreesNYC program.

A city known for its rich heritage and early beginnings, New York is becoming a pioneer in yet another area: community forestry. Their dedication to continuously grow their community forest sets an example of what’s possible even in a metropolis.

Is your community a Tree City USA? Learn more about our standards and how it can benefit your city.

More than 135 million people live in a Tree City USA community. The Tree City USA program recognizes communities for their commitment to urban forestry. The program sets up the framework for a healthy sustainable community forestry program and provides direction, assistance and national recognition for their work.

More than 3,400 communities of all sizes are part of the Tree City USA program. Our smallest Tree City USA community is Sibley, North Dakota, with a population of 28; proving firsthand that you don’t need to be a big city to care about trees. Sibley has been a designated Tree City USA for three years.

Sibley was established in 1959 by Edythe ”Toots” and Eddie Hagglund on a treeless prairie at the edge of Lake Ashtabula. What was once just an idea to build a hamburger stand along the lake grew to what would be an official township. One of the first things the couple did after they bought the prairie land was plant trees, and build a dance hall. Although the town has never surpassed 50+ residents it has grown to become a social hot spot, attracting as many as 200 people during the summer.

Sibley is an excellent example that communities of all sizes can be part of the Tree City USA program. We love all that Sibley has evolved into and applaud their commitment to a greener community.

Is your community a Tree City USA? Learn more about our standards and how it can benefit your city.

Albuquerque has been designated a Tree City USA community for 16 years and awarded the  Growth Award twice.

Home to 550,000 residents, Albuquerque is a city fused with western flare and modern culture.  Despite its arid desert climate, Albuquerque manages to stay green, encompassing more than 1.5 million trees with 13% tree canopy coverage. The city also fosters a healthy lifestyle; a 2007 March issue of Men’s Fitness listed Albuquerque as the fittest city in the United States. Residents are certainly making the most of the city’s 361 parks.

Albuquerque’s urban forest is an asset valued at $1.93 billion.

Is your city worthy of Arbor Day Foundation #TreeCityUSATuesday recognition?  If so, please tell us about it!