Before: Green space is untended and neglected.

Minutes west of Downtown Atlanta sits the English Avenue Neighborhood. This neighborhood has seen its share of tough years as the area with the highest crime rate in the city of Atlanta. The neighborhood lacks numerous community resources, including the absence of a single outdoor park… until now. And residents are hoping that their new park could make all the difference. 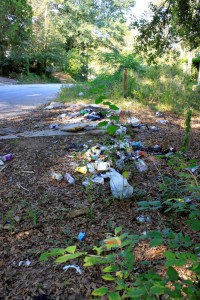 Before: The area is neglected and full of pollution.

I recently attended one of the events that helped make the Lindsay Street Park possible: Boise Paper’s Project Up planting event. It was a wonderful experience. What was once a neglected and polluted space has transformed into a luscious green sanctuary in the center of one of the most precarious areas of the state.

We planted trees and shrubs in the park while children played on brand new playground equipment, installed just a few days before the event. (check out this video of them playing) Joyful parents looked on with pride, pausing every so often to tell us how much this park meant to the community. 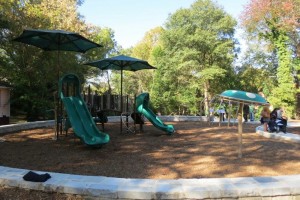 As we planted I kept thinking about the upcoming Partners in Community Forestry Conference and how the Lindsay Street Park Project was a nice example of the great things that happen when partners come together. The park itself is the culmination of a three year process led by The Conservation Fund in partnership with Trees Atlanta, Atlanta Botanical Gardens, English Avenue Neighborhood Association and over 15 other nonprofit organizations, each playing a key role in the process.

The Lindsay Street Park Project is a fine example of a model that can be replicated in other underserved communities that face similar issues. Check out our Facebook album to see more photos of the transformation.