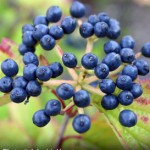 Think for a moment about the origins of the various culinary and medicinal purposes to which plants have been put over the millennia. For every fruit, nut, leaf, berry, etc. that became food or medicine for us at some point in history or prehistory, somebody initially served as the “guinea pig.” That is, somebody in a particular tribe was the first to try ingesting taro root, for example (better known as elephant ears). Said guinea pig survived (in this case), and others followed suit. Through a less fortunate guinea pig, people learned that foxglove didn’t make for a very good snack!

Conversely, however, we eventually discovered that digitalis (an ingredient derived from foxglove) could aid those with heart problems. Of course, our use of medicinal plants isn’t always so dramatic; and edibles sometimes merely widen our array of culinary options, rather than providing us with staples. Thus the juice of yellow dock can relieve the rash caused by stinging nettles, while chicory can be used as a coffee substitute.

In pondering such discoveries, I can’t help but wonder at how different life must have been in those bygone ages. Nowadays, we dissect computer applications, trying to learn how they work. But in those days, the same amount of energy must have gone into discovering everything possible about our botanical neighbors. In the days before supermarkets and medical clinics, it behooved you to find out what was edible around you, what could be used to treat an injury on the spot. Whether it was edible weeds you could eat during a famine or plants that would staunch blood after a battle, such as yarrow, plant knowledge could save your life. 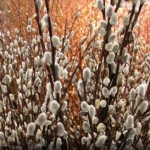 Trees, of course, have been among our greatest benefactors in this regard. E.g., the “salic” in the technical name for aspirin, “acetylsalicylic acid,” derives from Salix, the name for the willow genus, which is aspirin’s ancient source (think Salix discolor, the adorable “pussy willow“). Trees are better known, however, for their culinary gifts. Let’s consider one fruit tree and one nut tree:

To gauge the impression apple trees have made on our taste buds, simply consider how celebrated they have been in legend and song (think Garden of Eden, Johnny Appleseed, Little Green Apples), in idioms and mottoes (“apple of my eye,” “an apple a day”), and even in the naming of companies (Apple Computers).

Less celebrated are the hickory trees. And no, it’s not all about the nuts. When I consider reasons to plant shagbark hickory trees in the yard, harvesting the nuts may actually come in third on the list. I’m most impressed with the solid standing this tree holds in the fall foliage community. Another feature that stands out is the shedding bark, which affords visual interest in the winter landscape.

You’d have to be nuts not to appreciate the aesthetic features of hickory trees! 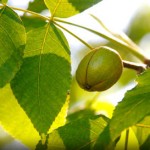 David Beaulieu's career as a landscape and garden writer builds on a decade of prior work with landscaping plants in the nursery business, and on a lifelong love of plants of all kinds. David currently writes a blog for about.com about Do It Yourself "Landscape Design"