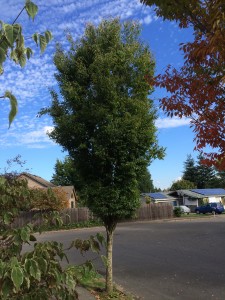 The following is a guest post by our friends at Society of Municipal Arborists.

The Society of Municipal Arborists (SMA) has voted Zelkova serrata ‘Musashino’ the 2016 Urban Tree of the Year. The yearly selection must be adaptable to a variety of harsh urban growing conditions and have strong ornamental traits. It is often a species or cultivar considered underutilized by urban foresters. The SMA Urban Tree of the Year program has been running for 20 years, and recent honorees include yellowwood (2015), ‘Vanessa’ parrotia (2014), and live oak (2013). You can see the full list of past winners on the SMA website, www.urban-forestry.com.

Zelkovas are native to Japan, Korea, and Taiwan. J. Frank Schmidt & Son Co. introduced Zelkova serrata ‘Musashino’ to the North American nursery trade in 2000. Named after a city in Tokyo (which itself is a city but also a prefecture containing multiple other cities), ‘Musashino’ has been a successful and popular street tree for many more years in Japan, proving itself useful as a narrow, upright form of zelkova. It has the genetic potential to reach 45 feet (14 m) in height and 15 feet (4.6 m) in width at maturity. It is hardy in USDA Zones 5 to 9.

In Rochester Hills, Michigan, the forestry division’s Dave Etz has overseen the planting of 47 ‘Musashino’ within the last six years. “So far we like what we see,” Etz says. “It’s adaptable to

difficult site conditions and appears to be one of the hardiest zelkova cultivars. After two consecutive winters with temperatures dipping near or below -20F (-29C), we’ve seen zero dieback, and many of our ‘Musashino’ are located along major roads and boulevards, where they also show good tolerance to deicing salt spray.”

Etz finds that ‘Musashino’ leafs out a bit earlier in the spring than the other zelkova varieties they’ve planted, and the new foliage seems to tolerate light frost. He says, “On our relatively young trees the fall color hasn’t been outstanding (yellow/bronze), but references indicate the fall color can be excellent (bright yellow to rusty red), so we’re hoping this will improve as our trees mature.” 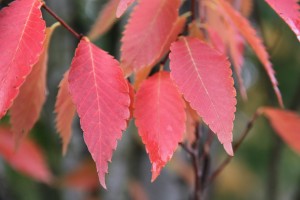 Providence, Rhode Island City Forester Doug Still has good things to say about ‘Musashino’. “It’s an interesting choice for tree of the year because it is somewhat of a niche species selection, literally,” he says. “Its narrow, upright form works when there is limited above-ground space for the tree canopy to grow.”

The largest project where Still has planted ‘Musashino’ has been a great success. In Providence, Atwells Avenue is well known for its wonderful Italian restaurants, a gourmet destination for the whole region. The street has relatively narrow sidewalks for a business district, with building frontage at back of sidewalk, restaurant awnings, and some sidewalk café seating. There isn’t a lot of room for trees to spread, and some business owners were concerned about having their signs blocked.

When funding was provided to plant trees up and down Atwells Avenue in 2007, this seemed the perfect location to try out ‘Musashino’. Still says, “The street called for a more formal uniform tree selection so, breaking from our pattern of providing diversity to each street tree planting, we planted 25 ‘Musashino’ trees. They proved to be an excellent performer, with very little care thus far.”

Still was concerned about the tight branching pattern on a species already known for its jumble of branches all emanating from one area on trunk, at least with some zelkova cultivars. He says, “I was surprised at the nursery to see that although the branch pattern is dense on this cultivar, the attachments were solid and arrange spatially up the trunk rather than from just one point. They’ve also proven to be healthy growers without (I’m afraid to say) much watering or care from adjacent business owners. I heartily recommend ‘Musashino’ zelkova when you’ve got a tight space and you need a reliable tree.” 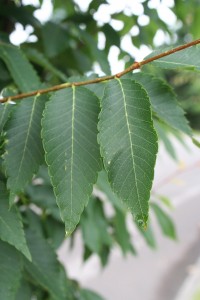 Over on the West coast, consulting arborist and former longtime Redwood City, California city arborist Gordon Mann has good reports for the Sacramento region as well. “After a few years of growing, we are experiencing initial nice crown growth on ‘Musashino’ in locations with narrow overhead growing space,” he says, “If the soil space is adequate, it appears to be a good deciduous tree to include in our palette. The fall color has been attractive, and maintenance needs have been normal.” Mann notes that, similar to his experiences with the narrow callery pear cultivars, the limited spread of the ‘Musashino’ crown does not appear to translate to reduced trunk diameter or root crown swell of the tree at maturity—hence the emphasis on adequate soil volume.

Frank Schmidt & Son. Co. literature says that the slender ‘Musashino’ leaves are just 3 inches (7.6 cm) in length on average, reducing the need for raking/leaf cleanup in the fall. They say that the cultivar “prefers moist, well-drained soil but can tolerate drought, is pH adaptable, pollution tolerant, and more heat tolerant than other zelkova selections.”

According to J. Frank Schmidt & Son Co. Director of Communications Nancy Buley, based on a six-year sales history (2009-2014), the nursery sells an average of approximately 6,000 bare root liners per year. Purchasers during the query period are located in 26 states plus Ontario, Canada—testimony to its adaptability to varied climates and growing conditions.

The SMA recognizes the underutilized, attractive, and extremely useful ‘Musashino’ zelkova for its service to urban forests and encourages its use when matched appropriately to site and as part of a diverse urban tree inventory.