Every year, natural disasters strike communities throughout the United States. Over the past three years, FEMA has declared over 256 individual domestic disasters. These disasters not only affect the people and the infrastructure of the affected communities, but also affect the natural environment as well. The loss of trees is a major component to this devastation, and is far more than meets the eye. 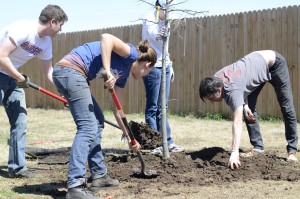 Volunteers work together to replant a tree in the Oklahoma Tree Recovery Campaign.

Trees play a vital role in our everyday lives and are often overlooked until they are no longer there. Trees help clean the water we drink, and improve the quality of the air we breathe. They provide natural spaces for our children to play, and food for a multitude of wildlife to eat. For many people, trees invoke memories of childhood climbing or apple picking. Residents of disaster-stricken areas often talk about the void they feel after their trees have been destroyed. These reasons demonstrate how important it is to restore those lost trees after a natural disaster.

If a disaster strikes your state or community, once the initial needs of the people are met there are numerous ways to jump start the process of tree recovery. Many groups and organizations are invested in the health of your urban tree canopy and can provide you guidance on what sort of specific response your community may need. A good first step would be to reach out to one of the following leaders at your local, county or state level: 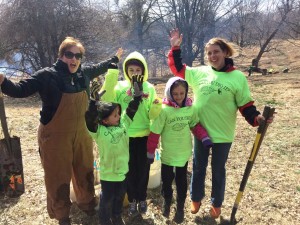 A group of girls help replant trees as part of the Kentucky Tree Recovery Campaign.

These leaders will be able to direct you towards future tree plantings efforts as your community continues to recover. You can also research local non-profit tree planting organizations. Local organizations are great advocates for communities and often have connections to a wide network of organizations who may also want to get involved. Alliance for Community Trees—a program of the Arbor Day Foundation—is a great resource to finding potential non-profits in your area; access the list here.

The Community Tree Recovery program is another way to start discussions on tree recovery in your area. The program focuses on getting trees back into the hands of homeowners following natural disasters. We partner with state and local forestry partners to ensure that long-term tree recovery is a part of the overall recovery process for devastated communities.

However you choose to get involved, replanting our urban tree canopy is an extremely important piece of the recovery process following a natural disaster. Beginning the process of replenishing trees will ensure that the next generation enjoys the natural beauty that once was. Don’t wait to get involved. Find out how you can help your community and state recover today.

How would your community work toward restoring the local ecosystem following a natural disaster? The terrible wildfires in the western part of the United States are the latest example of why this question remains top-of-mind for community leaders. Communities continue to face devastating loss at the hands of wildfires, hurricanes, tornadoes, flooding and many other natural disasters.

The Community Tree Recovery Program was set up to play an important role in the process of helping communities rebuild following natural disasters. We are currently working on recovery projects in twelve different states. One of these projects is in need of immediate assistance because of timeliness and severity.

The news has been filled with reports of the many uncontained wildfires out west. And with good reason, many of these fires are the worst in decades. Washington is experiencing the worst wildfire in state history, the Okanogan Complex Fire. This comes on the heels of the  Carlton Complex Fire – the previous worst wildfire in state history – which happened just last year.

As the courageous firefighters battling these blazes and work to contain them, we need to begin the planning process for helping communities recover. Humanitarian needs will be priority one. But once those needs have been met, we will begin the process of distributing trees to organizations and residents in these areas. Help these communities replant trees lost to wildfire.

As the 2013 fire season continues, the costs of fighting wildfires have continued to increase. In 2012, fires consumed 40 percent of the Forest Service’s annual budget, compared to only 13 percent in 1991. Many factors have created these rising costs through the years, including worsened drought conditions, continued climate change, and an increased number of homes built near forested areas. These escalating expenses are proving to be so costly, that they are leaving less money for wildfire prevention.

Drought conditions, climate change, and homes in traditionally forested areas have all contributed to the rising costs of fighting wildfires.

Due to these heightened factors, for fiscal 2014, the federal administration has proposed drastic spending cuts to hazardous fuels reduction, or clearing smaller trees and underbrush through controlled cutting and burns. The idea behind hazardous fuels reduction is that by removing this underbrush, fires will have less fuel to spread rapidly and can then be controlled faster. Donald Smurthwaite, spokesman for the National Interagency Fire Center states, “In a recent study by the Bureau of Land Management, when wildfires burned into fuels treatment areas, they were slowed or stopped about 90 percent of the time. With the decline in fuels funding, we’re worried that saving money today will mean larger and more destructive fires tomorrow.” Limited funding has decreased fire prevention for several years. In 2009, 4.5 million acres were treated to prevent wildfires, and under the proposed budgetary cuts, fewer than 2 million acres would be treated in 2014.While the proposed budget for fiscal 2014 would increase overall funding for wildfires, it would largely cut the hazardous fuels budgets for several agencies. In all, 41 percent of these budgets would fall, reducing the current funds of $502 million to $297 million.  This will be the third consecutive year the administration’s proposed budget includes spending cuts to forest treatment to prevent wildfires. Many of these cuts will greatly affect our tree partners — the U.S. Forest Service and the National Park Service.

As an organization of people that cares deeply about our nation’s forests and trees, the Arbor Day Foundation continues to challenge ourselves to better understand how to collaborate with our partners on the ground as they overcome these budgetary hurdles.  There simply isn’t funding available as there has been in decades past, and that is where our valued members, supporters, corporate donors and partners can help us to heighten our efforts to do more with less. They can help us to see new ways to partner with these groups, to create even more relevant programs, and to provide trees to those areas most in need. As we address each new challenge, we search for ways to better engage our loyal members and tree advocates to keep them involved in the good work our partners accomplish each year with our support.

With the help and generosity of our vast network of tree advocates, we will continue to foster our enduring 25-year partnership with the U.S. Forest Service. With their help, the Arbor Day Foundation will continue to bring new ideas surrounding education, conservation, and tree planting in wildfire-stricken areas.

Two ways you can take action now:
The Backyard Woods Program: Managing Forests Can Save Forests
Donate now to replant trees where they’re needed most